Our tetramers show excellent brightness and experimental reproducibility. To avoid the difficulties associated with dissolving and loading the most commonly used ligand, alpha-Galactosyl Ceramide* (α-GalCer), our tetramers come pre-loaded. They can also be supplied empty for loading with your ligand of choice. 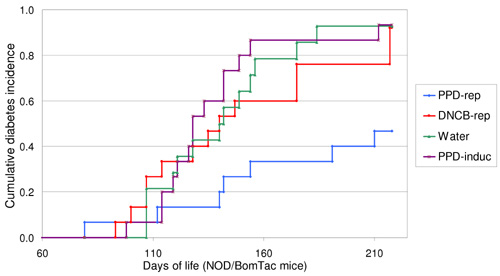 Figure 1. Repeated application of PPD inhibits the development of diabetes in NOD mice.  The figure shows a Kaplan-Meier curve of the diabetes incidence for four groups of mice. DNCB-rep, PPD-rep and Water, refers to the groups of mice that were repeatedly exposed to DNCB, PPD or water every other week. PPD-induc refers to the group of mice that was only exposed to PPD in the fourth week of life. The NOD mice exposed to PPD repeatedly, displayed a cumulative diabetes incidence of 47%, in contrast to 93% of the water treated group (P=0.004). The log-rank test for all the shown curves gives a significance of P=0.008.

Natural killer T (NKT) cells are implicated in the regulation of immune responses associated with a broad range of diseases, and seem to be essential for several aspects of immunity. They represent a unique lymphocyte population that co-express NK cell markers and a semi-invariant T cell receptor. When stimulated with CD1d-restricted glycolipid antigen, NKT cells produce large amounts of Th1-type and/or Th2-type cytokines that lead to downstream activation of dendritic cells, NK cells, B cells and T cells. The dysfunction or deficiency of NKT cells has been shown to lead to the development of autoimmune diseases (such as diabetes or atherosclerosis) and cancers, and they have also been implicated in the disease progression of human asthma.

CD1d molecules are non-classical MHC molecules that are characterized as non-polymorphic, conserved among species and possessing narrow, deep, hydrophobic ligand binding pockets. These binding pockets are capable of presenting glycolipids and phospholipids to Natural Killer T (NKT) cells. NKT cells represent a unique lymphocyte population that co-express NK cell markers and a semi-invariant T cell receptor (TCR). They are implicated in the regulation of immune responses associated with a broad range of diseases.

The best characterized CD1d ligand is α-Galactosyl Ceramide (α-GalCer), originally derived from marine sponge extract. Presentation of α-GalCer by CD1d molecules results in NKT cell recognition and rapid production of large amounts of IFN-gamma and IL-4, bestowing α-GalCer with therapeutic efficacy. More recently, the lysosomal sphingolipid isoglobotrihexosylceramide (iGb3) has been identified as a CD1d ligand. This endogenous sphingolipid is thought to be responsible for NKT cell development. 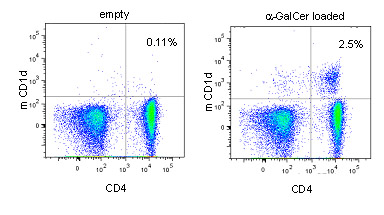 Figure 3. In order to reduce background staining, splenocytes were depleted of B cells using CD19 microbeads (Miltenyi Biotec). The procedure used 3 x 105 cells per stain. Cells were incubated with 2.4G2 monoclonal antibody at 25µg/ml in 50µl per sample, at 4oC for 15 minutes in order to block Fc receptors. Following a wash step, cells were incubated with one test (2µl) of mouse CD1d tetramer for 30 minutes. The cells were then incubated at 4oC for 20 minutes with anti-CD4-Alexa488 and anti-CD3-PerCP monoclonal antibodies in 50µl total volume. Following two further washes, the cells were acquired and analyzed by flow cytometry.

Figure 4. Representative FACS analysis of murine iNKT cells from blood, BM, spleen and liver in naive and 5T33MM mice. Live cells (7-AAD negative) were stained with a-GalCer/CD1d tetramer which specifically binds to Va14 of the invariant TCR and with TCR-b. Double positive iNKT cells were gated. The percentages are indicated in each plot.

Most T lymphocytes are thought to display specificity for peptide fragments of protein antigens presented by major histocompatibility complex (MHC) molecules. However, many studies have demonstrated T cell reactivity against lipid and glycolipid antigens presented by the MHC-like antigen-presenting molecule CD1. They include lipid components of microorganisms as well as self-antigens, many of which are made in response to cell stress or infection, therefore, detection of lipid-reactive T cells may be important for understanding disease pathology and immunity. Indeed, many studies have highlighted the importance of invariant natural killer T (iNKT) cells in protection against infection, cancer and autoimmune disease and cellular therapies using iNKT cells are showing promise in clinical trials in cancer patients.
iNKT cells recognize lipids presented by CD1d, one of four human CD1 isotypes known to present antigens to T cells. They have been extensively studied because they can easily be activated using the xenogeneic glycolipid, α-galactosylceramide (α-GalCer) and detected using antibodies specific for their invariant T cell receptor (TCR) α-chains (Vα24Jα18 in humans). We have recently shown that circulating iNKT cells are depleted from patients with oesophageal adenocarcinoma (OAC) and may protect against the disease. But it is now apparent that humans have many other CD1d-restricted T cells, termed type 2 NKT cells, that recognize other lipids using non-invariant TCRs. Furthermore, murine studies have provided evidence that type 2 NKT cells can regulate tumour immunity.

To examine the presence of type 2 NKT cells in OAC patients, my PhD student Ashanty Melo and I used ProImmune’s CD1d tetramers loaded with various glycolipids to detect CD1d-restricted T cells using flow cytometry. Initially we optimized glycolipid loading using α-GalCer and tested if the loaded tetramer could detect lines of expanded iNKT cells. We loaded the tetramers with a 12 molar excess of vortexed, heated and sonicated α-GalCer, diluted to 0.2 mg/mL in PBS containing Tween-20 or saponin, for 18 hours at room temperature and found that 0.25 µL of original tetramer was sufficient to detect iNKT cells using flow cytometry (Figure 5). Importantly, the same amount of negative control tetramer, provided by ProImmune, did not stain any cells (not shown).

We next attempted to repeat these experiments using other glycolipids that are known or predicted to bind to CD1d and activate T cells. However, optimization was more difficult because we did not have cell lines known to express TCRs specific for the lipid/CD1d complexes. We used peripheral blood mononuclear cells (PBMC) from healthy donors and since some γδ T cells of the Vδ1 subtype are known to recognize glycolipids presented by CD1d, we also tested our loaded tetramers with expanded lines of Vδ1 T cells. Importantly, 0.25 µL of CD1d tetramer, the amount optimized to detect iNKT cells, failed to detect type 2 NKT cells. We found that 1µL of CD1d tetramer loaded with similar molar ratios of sulfatide, lysosulfatide, cardiolipin or tetramyristoyl cardiolipin detected T cells within PBMC and/or Vδ1 T cell lines, whereas similar amounts of the negative control tetramer or empty tetramer did not (Figure 6).

We next enumerated the above type 2 NKT cell populations in blood from OAC patients and healthy control subjects and found that T cells reactive against sulfatide and tetramyristoyl cardiolipin were present in significantly greater numbers in the OAC patients, in whom they accounted for up to 10% of total T cells and up to 80% of Vδ1 T cells. Having identified novel type 2 NKT cells in patients with OAC, we were then able to characterize their functional responses to CD1d-positive cells presenting the glycolipids, and have found evidence that they suppress the anti-tumour responses of iNKT cells. Thus, CD1d tetramers can be used to identify novel T cell populations that may influence immunity against cancer and infectious pathogens.